Television as a Symbol of Lost Public Space, The exhibition “TV Gallery” and public discussion “Art and Public Television” 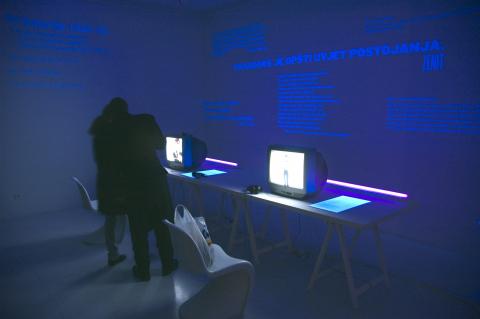 The exhibition “TV Gallery” and public discussion “Art and Public Television” has been opened and held in Zagreb in Gallery Nova, on the 6th of December 2007, and it has raised debate about conditions of art and cultural production, public television and broadcasting of video art in territory of former Yugoslavia, followed by reflections on today's mass media conformism, commercialization and homogenization.

Foto documentation from the exhibition “TV Gallery” in Gallery Nova in Zagrebu: http://www.kuda.org/?q=sr/tvgalerija_foto

The exhibition “TV Gallery” has been conceived in order to contextualize and represent specific television production (“TV Gallery”) that was created at Belgrade Television and broadcasted on the Yugoslav TV network from 1984 – 1991. The exhibition is dealing with cultural policy, conditions of art and cultural production, public television and production and broadcasting of video art in territory of former Yugoslavia. The author of television show “TV Gallery” - Dunja Blažević – is a curator and art historian who used to run gallery of Student's Cultural Center in Belgrade during 1970-is as one of the rare vivid spaces for art experiments, expanded and new media practices, critical perspectives and for strong international collaboration among artists.

Since 1981. Dunja edited TV show "The Other Art" at the TV Belgrade, which is actually a forerunner of "TV Gallery" series. As Dunja Blažević stresses in the interview made for the occasion of the exhibition, with her engagement on television, she actually continued curatorial practice in another medium, in TV medium, which appeared to be one of the most natural public places for promotion, discussion and critical overview of what was called “new art practices”, and especially of video art production. She also stresses that “TV Gallery” project represents certain homage to the “TV Gallery” project by Gerry Schum, produced and broadcasted at German national television, ten years before her own production achievement, still under a different circumstances.

From one hand, project such is “TV Gallery” television production by Dunja Blažević was possible because of the way how cultural policies were organized during times of socialism in Yugoslavia during 1970-is and 1980-is, and especially how production at public television was organized, still containing “niches” for promotion of emancipatory and educational practices besides general control of what should be publicly broadcasted. Those were “niches” which were possible to win over for promotion and analysis of exactly those practices. One could say that unporosity of television media in those times was much less then it is today. In that constellation, unique editorial policy, which appeared to be successful, was that marginal art practices have the right to be publicly represented and to be publicly present, as much as any other national or gender minority. It meant that editorial policy in a way used values engraved in the very ideology of socialists society. On the other hand, landscape and trend of democratization of art in that period played important roll in emergence of the “TV Gallery”. “Democratization of art” from curatorial position meant mediation between artist and their work and relationship with the audience. It meant both escape from traditional media of art and embracement of all alternative and new media possibilities, and reflection on the very nature of art, which was the basis for expanding the field of art. As Dunja Blažević put it, democratization of art also meant specific relation to the audience, since it was important to go out from closed and elitists gallery spaces and to win over new ways of communication and to enter public space in a different ways. As artist Dalibor Martinis put it in the debate “Art and Public Television”, artists of that time didn't want to stay closed up in a gallery, but rather they searched for new ways how to initiate reflex in the society, how to criticize ideology and how to deal with the nature of art and media. This attitude was sort of correction of “official” understanding of “democratization of art”, which was ideology based (such was for example the project of introducing philharmonic orchestra to the workers in the factories). One of the crucial art practices that emerged in that time was video art, which was technologically the most appropriate to be distributed through broadcasting system, although in many cases it represented critique of exactly this mass media even in those early time of television development. Professional production of video art, which characterized art practices of that time, started quite early (1972) and it was interesting that public television was the place when extensive production took place. Since there were no independent production studios in the former Yugoslavia and video production has been technologically demanding, “TV Gallery” opened up the space for artists to work with professional video technology and to have broadcasting system opened for distribution of their production. This is one of the emancipatory moments and world wide unique example, which testifies about broader cultural and political landscape of that time. One important fact that launched video production and new art practices in that time is influence of latest trends in film practice and production as well (nothing was the same after Godard), and especially influence of experimental film production which was quite developed in that time. This was also important moment for production of “TV Gallery” show, since it also represents collaborative and open platform of author and editor of the show and many other people: movie and television directors, artists, researchers, art historians, etc.

At the exhibition in Gallery Nova in Zagreb, there are twelve shows of “TV Gallery” presented (of over 90 that were produced in the period from 1984-1990. and only around 20 were preserved at the Television of Serbia). Although the exhibition is showing selection of the whole production, those shows are thematizing wide range of still present questions in art and its representation, in the same time depicting wide range of “TV Gallery” production itself. Themes are ranging from historical avangards (Russian avangarde, avangarde movements in Yugoslavia), neo-avangard of the 1960-is and 1970-is, architecture, comics, video art, design, literature, “new wave”, etc. As it has been said in the introductory text of the exhibition, those shows are interesting as a symptom of not only cultural and art scene of that period in Yugoslavia, but as well as public television, society and the state where these projects were possible. Today, media language has changed, it has matured and transformed itself and that could be the reason why “niches” which is possible to conquer with marginal and/or educational content, don't exist anymore. This is followed by flow of capital and commercialization of television, where most of the educational contents is seen as uninteresting and nonprofitable, which makes television today more as “a tool for oppression” then “ a tool for democratization”, which existed as a myth for a long time.