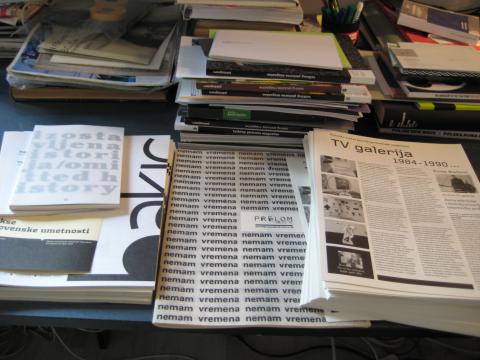 "Why (post-)Yugoslav Political Context?"
After a decade of wars and political turmoils, the geopolitical and cultural space of former Yugoslavia is starting to take a new shape. Although now all political elites/actors in former Yugoslavian states declare their fidelity/adherence/devotion to the EU project, the actual political and cultural policies remain self-enclosed, autistic and hostile to most forms of regional exchange. On the one hand, the official local cultural policies still favor projects and programs which aim to create strong and exclusive national identities. On the other, although the elites recognize the need for more intensive regional exchange as a necessity for joining the EU, whenever some regional cooperation is mentioned they say that no one wants to do anything that would resemble the former Yugoslavia as a „prison-house of the nations“. All-in-all the prevailing opinion about former Yugoslavia and the Socialist project it stood for is absolutely negative.

With our research, we aim to study critically the heritage of cultural, artistic and intellectual projects of former Yugoslavia to extract positive and valuable aspects of it. Instead of practicing neo-liberal multiculturalist politics of folkloristic „getting to know the Other(s)“ and live with them in a kind of peaceful coexistence – which obviously goes hand-in-hand with still prevailing nationalism and chauvinism, we will focus on the possibilities of reviving the creative and progressive experiences that existed on the cultural, artistic and intellectual scene in former Yugoslavia.

Therefore, in our research of historical and political, artistic and cultural processes in former Yugoslavia and how are those perceived and utilized nowadays, we strive to exit the impasse of double-bonded discourses of global neoliberalism and local etno-nationalism, thus making the way for a new and productive future of regional cooperation. The usual post-Socialist discourse is affirming the dominant neo-liberal views on socialist Yugoslav modernism as unilaterally totalitarian and authoritarian. Also, local nationalist and chauvinist discourses present Yugoslav socialist modernism as a mere tool of Communist dictatorship and Tito’s tyranny. This is the very point of convergence or meeting point of post-socialist neo-liberal and nationalist discourses.

Our project will be dedicated to re-discovering and re-problematizing the political context of cultural, artistic and intellectual production as opposed to such simplifying and futile stand-points. Therefore, with this project we strive to open a new critical "third" space, being certain that it is the best way of establishing productive and lasting cultural relationships in the region. We contend that, through this critical research, the socio-cultural heritage of Yugoslav modernism could present itself as a viable source of present artistic, cultural and intellectual regional cooperation.

"Why Political Practices of Art"?
The aim of this project is to redefine relations between politics and art established by recent curatorial and art critical practices in the (post-)Yugoslav cultural-political space. Those practices still owe to the classic art historical paradigm, which explains the social and political potentials of art through the mechanisms of the insertion of art practice into the body of daily politics and historical settings.

The object of its analysis is – the way that particular art formulation represents its social environment and given political circumstances. At the center of its attention is representation. That's why in most interpretations art acts as the separated from society, as its mirror-representation, as something that comes "after" the whole history has already happened. The same logic is applied to the recent set of East European and Balkan shows where the artworks are presented as a "documents" of political and historical processes of the fall of real-Socialism, dissolution of Eastern sphere, wars and conflicts, nationalist politics etc. This tendency is being reflected in the recent art production, in which artists are interpellated into their given roles.

The project attempts to use discursive, analytical, and explicative possibilities of contemporary art to point to the hegemonic position of the notion of “Western Europe”, articulating the subject from the perspective of “cultural workers” who belong to the broad cultural-geographical complex which we term European non-West. In contrast to the notions like Balkan, Eastern Europe, Middle East, Mediterranean, New Europe, post-communist countries etc., whose geography oscillates in relation to hegemonic geopolitical aspirations, “Western Europe” is actually defined as a clear geographical area, identified through economic parameters, resulting in reductive assumptions of its geography, politics, race, religion etc., while Western societies are (also) imbued with antagonisms, and these very antagonisms (class, tradition-normalization, national-global, openness-closeness, national and religious exclusivities, multi-culturalism as tolerant racism etc.) are constitutive for every contemporary society.

Art and culture are instrumentalized as a means of mediation between the developed liberal-capitalist West and the post-communist societies which “still need to be integrated in the liberal-democratic world of the free market and human rights”. Still, critical, financial and institutional validation from the West is often the only channel open for securing and increasing cultural capital at the local level.

Against the understanding of cultural domain based on the notion of identity, particularly on national identity, we would like to make a shift from the paradigm of art-as-representation to art-as-political practice.