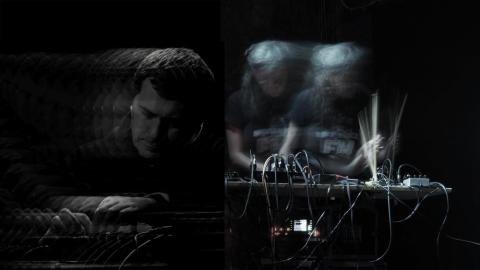 In the period from September 29 to October 3, 2022, an intensive creative sessions of two artists from Vienna and Novi Sad, Billy Roisz (visuals, electronics) and Laszló Lenkes (electric guitar, electronics) will take place at kuda.org studio.

Creating a musical work in the moment, through a focus on electro-visual-sounds improvisation, these sessions of creative work are directed towards free floating music, improvisation in an endless landscape of sounds, expanding interaction between sound and images, and sound spectrum in a unique combination of instruments.

The final public gig and presentation will be realized in cooperation with bookstore and club Zenit, Njegoševa 24, Novi Sad on Saturday, October 1, 2022 at 20h.

Program NOISM is implemented through a series of short-term art residencies and workshops aimed at authorial production which enables collaboration between international artists and local participants to create new music artwork or sound installations in public space. NOISM is a program through which contemporary practices in music and sound experiment are developed interaction and the process of joint creation of works. It is dedicated to temporary zones of groupness and improvisational practice that arises in sound, with sound and around sound.

Her videoworks are distributed by sixpackfilm & lightcone. Her music was released a.o. on editionsMEGO, mikroton and for/wind. She was co-organizer/programmer of annual REHEAT Festival (2007-2015) and of Noche de Los Muertos (2012-2021).

László Lenkes (b. 1979, Novi Sad) is a guitarist, playing both standard and tabletop guitar in various electro-acoustic improvisational forms. He has been part of the local underground music scene from the beginning of the 2000’s, beside musical improvisations with fellow musicians from the 2010’s, through his literature studies, he has been practising experimental improvisation mixing with other media, namely sound poetry and similar historical avant-garde practices playing together with notable East-Central European avant-garde artists in the genre (e.g. Katalin Ladik, Endre Szkárosi, etc).

He improvises mostly in forms of standard duos or trios in collaboration with other artists-improvisers (eg. Ex You trio, the Funambulists trio, collabs with Paul Pignon, Zsolt Sőrés, etc). He has been collaborated on several experimental musical releases in the past decade via underground labels from around the globe.

A series of improvised duo sessions within the NOISM 2022 program is realized through the cooperation of two organizations klingt.org (Vienna) and kuda.org (Novi Sad) supported by the Austrian Cultural Forum Belgrade, City administration for culture of Novi Sad, Ministry of Culture and Information of Republic of Serbia, and the FfAI Foundation.