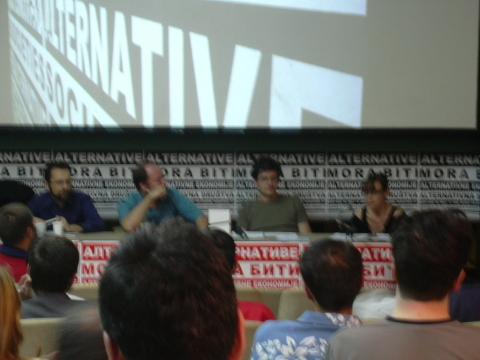 PUBLIC DEBATES "There Must Be an Alternative"

"There is no alternative" is the statement that was made by the former British Prime Minister Margaret Thacher with regard to the economic injustices of the 1980s in the Great Britain. At the same time, politically wanted processes o frestructuring were continued favoring transnational companies and the high finance. To describe globalized capitalism as a sort of fateful factor to which there can be no alternative still is a popular strategy of neoliberal ideologies. "There Must Be an Alternative" is the opinion that was voiced within artistic positions of analysis and critique of existing (economic) systems and zooms in on basic approaches to possible alternatives to capitalism. On the other side, global capitalism entered openly, in a visible way, into the field of contemporary art. The art market is the most important regulator of esthetics and trends in the art field. In the context of extremely right-wing politics in Serbia and these incredibly fast economic transformation processes, there is a conviction that the public debates have the potential to appeal on questioning and rethinking the local system of rule and to create the bases for thinking about social and economic alternatives.

About debates participants:
Marina Gržinić holds a Ph.D. in philosophy and works as a researcher at the Institute of Philosophy at the ZRC SAZU (Scientific and Research Centre of the Slovenian Academy of Science and Art) in Ljubljana. She is Professor at the Academy of Fine Arts in Vienna/The Post-Conceptual Art Practices Class. She also works as a freelance media theorist, art critic, and curator. In collaboration with Aina Šmid, Gržinić has been involved in video art since 1982. She publishes extensively. (margrz@zrc-sazu.si)

Brian Holmes is an art critic, cultural theorist and activist, born in San Francisco and living in Paris for many years. Since the Carnival against Capital in the City of London in 1999, he has taken part in and written about many of the large demonstrations against corporate globalization around the world. At the same time, he has analyzed a variety of artistic and spectacular practices in order to characterize the new forms of capitalistic subjectivity (the flexible personality) and their alternatives, particularly as glimpsed through artistic inventions. The results of these investigations can be found in an anthology of essays, Hieroglyphs of the Future (Zagreb: Arkzin/WHW, 2002) and in the work presented at www.u-tangente.org, a project created in common with the French cartographers Bureau d'Etudes.

Todor Kuljić, Born 1949, graduated 1972 in Belgrade (Faculty of Philosophy, Department for sociology), received M.A.1975. and Ph.D.1981. At the Faculty of Philosophy in Belgrade is worked since 1975. where is now Ph D Professor for Political Sociology. From 1985 is a member of the Committee on Political sociology (International sociological Association). Articles are translated in German, English, Hungarian, Slovenian and Macedonian language. Research fields: Ideology and organization of historical political systems and movements, mastering the past, culture of remembering , revision of the history, theories of totalitarism, etc.

Svebor Midžić, born in 1974 in Belgrade. Theoretizes and writes. Published in various local and international magazines. Member of the editorial board of the "Break" magazine for contemporary art and theory. Works in the Centre for Contemporary Arts - Belgrade from year 2000, where he held position of the Editor of the Publishing. One of the editorial series is "Vesela nauka" where work of Rastko Močnik and Boris Buden is published. From 2003, he is director of the Centre for Contemporary Arts - Belgrade. He was art director of Yugoslav Biennial of Young Artists Vršac 2004.

Oliver Ressler was born in 1970, lives and works in Vienna. Ressler is an artist who is doing projects on various socio-political themes. Since 1994 he has been concerned with theme specific exhibitions, projects in public space and videos on issues of racism, migration, genetic engineering, economics, forms of resistance and social alternatives. Many of Resslers works are realized as collaborations. The film "Venezuela from Below" (67 min, 2004) was realized with the writer Dario Azzellini and it focuses on the processes of self-organization by the true actors in the profound social transformation in Venezuela: the grassroots. Project "European Corrections Corporation" thematizes the phenomenon of prison privatization and it was realized as container-installation in public inner-city spaces in Wels, Graz and Munich in 2003/2004 with artist Martin Krenn. In 2005, Ressler focuses primarily on the continuation and production of new videos for the project "Alternative Economics, Alternative Societies".
www.ressler.at