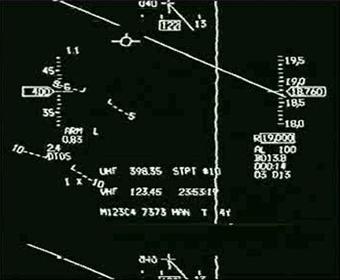 Safe distance is video that was recorded during NATO air strikes against FR Yugoslavia. Videotape shows electronic cockpit of the US AIR Force plane. There were 4 airplanes flying from NATO-base from Italy to destination in Yugoslavia. Mission objective was to bomb several targets in the area around city of Novi Sad. On the way back, after mission was completed, plane was shot. Tape (Sony video 8) was found near crashed plane in Fruska Gora mountain in Srem region. It shows electronic cockpit with basic graphical interface and voice communication between pilots. Videotape is a regular document of flight used by command structures to analyze its efficiency and success after very mission. Tape presents these last moments before plain was crashed...

Interface of this cockpit is completely reduced, cold, black & white. Cold electronic display is pixilated presentation of outside reality with basic position information (longitude & latitude). The first impression of video is that this is an excerpt from flight simulator, since we are learned to regard similar graphical interfaces as something that is basically virtual representation. Comparing to contemporary popular simulation games cockpit of airplane looks as an obsolete seventies style games.

Main promise in today's warfare is institution of safe war; a war without casualties, and whole campaign against FR Yugoslavia was based on that premise that this is not actually a war but just the humanitarian intervention with some collateral damage. Intervention against FR Yugoslavia is the first war in history that is won with exclusively air strikes without ground troops involvement. This video provokes the myth of non-lethal military campaigns, a myth that was (and still is!) constantly fabricated in collective imaginatorium of allied countries.

The fact that multinational corporation Sony produces tape, used by US AIR Force, shows the transnational nature in today's global warfare. This symbolical point, Sony tape in US AIR Force plane, unfolds US - Japanese capitalistic axis (Sony was build its empire thanks to strong business relations with postww2 occupation forces). Also, there is explicit example of global standardization, it's like coke - paradigm. Both american president and proletarian subject drinking coke; both home videos and air strikes missions are recorded on Sony super 8.

Graphical interface of cockpit is only connection that pilot has with its surroundings; he is isolated from exterior, from reality that he produces below. Subject is immersed in virtual presentation and he is completely dependent on technological superstructure. After very impact he is calm and alone, and only thing that can shows us his personal drama is his breathing.