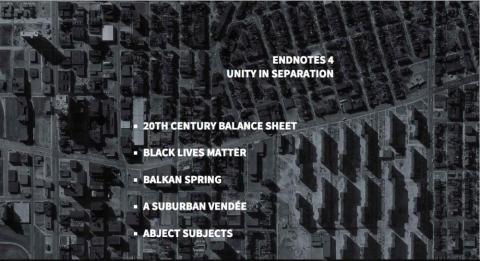 Available from Friday 6 November. Order a copy on http://endnotes.org.uk/

Endnotes is a journal/book series published by a discussion group based in Germany, the UK and the US. The original group was formed in Brighton, UK in 2005 primarily from former participants in the journal Aufheben, after a critical exchange between Aufheben and the French journalThéorie Communiste. But with migration and the addition of new members the group has become increasingly international. Endnotes is primarily oriented towards conceptualising the conditions of possibility of a communist overcoming of the capitalist mode of production—and of the multiple structures of domination which pattern societies characterised by that mode of production—starting from present conditions. As such it has been concerned with debates in “communist theory”, and particularly the problematic of “communisation” which emerged from the post-68 French ultra-left; the question of gender and its abolition; the analysis of contemporary struggles, movements and political economy; the dynamics of surplus population and its effects on capital and class; capitalist formations of “race”; value-form theory and sytematic dialectics; the revolutionary failures and impasses of the 20th Century.

The group was founded on a commitment to ruthlessly honest, open-ended internal debate, in which no topics would be off-limits, and in which the conversation itself was to be given priority over concerns about publishing, political position-taking or other matters in which the Ego—collective or individual—would necessarily take centre-stage. As such, the journal is conceived specifically as a by-product of this debate, rather than a simple forum for the publication of articles on its chosen theme. And for this reason, wherever possible, Endnotes publishes articles under the group name, rather than those of individual participants. Where contributions are taken by named authors, these are typically commissioned from individuals who are outside of the core group at the time of publication, but who are engaged with issues closely connected to its concerns. Thus, while blind submissions are welcome if they engage closely with these concerns, it should be underlined that Endnotes is not a conventional magazine or an academic journal with standard submissions procedures, peer review etc. It exists simply for the sake of good, impolite conversation, is self-funded, and entirely lacking in affiliations.

Our main distributors are Central Books (UK and Europe) and Active (UK and Europe), andLittle Black Cart (North America). Please get in touch with them about bulk orders or getting wholesale arrangements for infoshops, shops etc, or contact us directly atendnotes@endnotes.org.uk if you’re somewhere else in the world.

While you can order copies direct from us through this site, Endnotes is also available through various bookstores and distributors, including:

Email us at endnotes@endnotes.org.uk for other distribution queries.