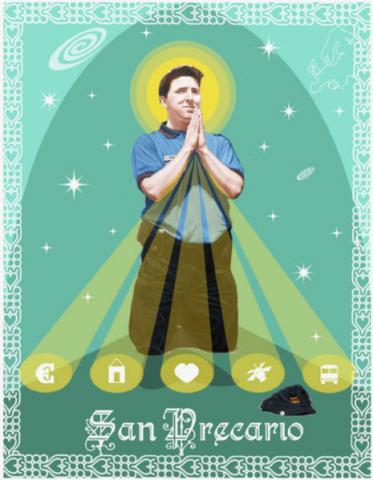 More problematic is the fact that precarity seems to conflate two categories of workers that are at opposite ends of labor market segmentation in postindustrial economies: pink collars working in retail and low-end services (cleaners, janitors, nurses etc.) under constrictive but standardized employment norms designed to leave them isolated vis-a-vis management power; and young talent temping for cheap in the information economy of big cities around the world: the creative class of strongly individualistic workers illlustrated by managerial literature.

It also remains to be seeen whether the insider/outsider division that economists observe in European labor markets means that the young, precarious, non-voting, and non-owning outsiders have fundamentally conflicting aims with respect to older insiders who tend to work full-time, long-term contracts and/or enjoy relatively high pension benefits and who command a disproportionate weight in European public opinion and political debate.

Precarity and the Antiglobalization Movement

Around year 2000, the word started being used in its English usage by the antiglobalization movement (Marches Européennes contre le chômage la précarité et les exclusions; European Marches against uneployment, precarity and social exclusion), and also in EU official reports on social welfare. But it was in the strikes of young part-timers at McDonald's and Pizza Hut in the winter of 2000, that the first political union network emerged in Europe explicitly devoted to fighting precarity: Stop Précarité, with links to AC!, CGT, SUD, CNT, trotzkyites and other elements of the French radical left.

In 2001 Italian antiglobalization collectives and networks, as they were preparing for the Genoa countersummit just months away, inaugurated in Milan a new kind of first of may, MAYDAY, spelling it like the international call for rescue, and explicitly centering it on the street representation of the so-called "precarious generation". It employed carnival-like techniques of agitation (allegorical wagons, media subvertising, colorful actions etc.) in imitation of gay prides and love parades of the 1990s. Italian activists meant it as a revival of the wobbly traditions of May Day, and consequently as a break with traditional union representation and social-democratic compromise that had allowed precarity and social insecurity to spread unchecked to reach critical levels in all of Europe, thus repeating the experience of UK and US economies with a few years' lag.

By 2003, the event had grown exponentially in size, and Catalan antiglobalization activists participated as non-neutral observers. In 2004, Barcelona joined Milan's mayday efforts, as delegations of French Intermittents participated as guests of honor in both mayday parades. The same year saw the launch of the icon of San Precario, patron saint of the struggle against precarity. The icon proved very popular in Italy and abroad, and would colonize the mainstream mediascape in the following years. By virtue of all these developments, mayday 004 drew 80,000 young protesters from all over Italy, and the rest of Europe took notice.

In October 2004, libertarian and syndicalist collectives from all over Europe gathered at Middlesex University at "Beyond ESF" (a critical reference to the European Social Forum that was being held elsewhere in London) in order to give life to a unified European May Day of precarious and migrant workers: EUROMAYDAY, which involved a dozen of European cities in 2005, and about twenty in 2006, with Milan, Paris, Helsinki, Hamburg, and Sevilla being among the most lively nodes. In 2006, the mayday process was launched in Brussels on Good Friday with few hundreds activists from Belgium, France, Italy, Germany protesting against pro-business lobbies in the European Quarter: "no borders, no precarity: fuck the new inequality!".

The euromayday network has gathered several times across the EU to discuss in its assemblies common actions against precarity and mobilizations against the persecution of immigrants, and particularly the segregation of undocumented migrants in detention centers all over Europe. Euromayday demands the full adoption of the EU directive on temporary workers being blocked by the Barroso Commission, as well as a European minimum wage and basic income. Cyber and queer rights are also part of the euromayday deliberations and activities.

Rebelling against precarity in France, Denmark, and the US

A core constituency of mayday has been the movement of Intermittents, the French expression to refer to stage hands and showbiz personnel. In 2002-2005, the Intermittents captured the French imagination and filled the press with their inventive rebellious tactics (e.g. they famously disrupted live TV news programs and the 2004 edition of the Cannes festival) denouncing precarity in the form of cuts to their unemployment benefits (they counterproposed an alternative reform of the system which was so well crafted that put French élites and union leaders in an awkward position).

In the early months of 2006, French youth rejected the CPE, the first-job contratct introduced by the government who made it easier to fire workers under 26. Clashes with the riot police, as it reclaimed Sorbonne from occupying students was the signal that something major was happening, as the university had been the epicenter of social insurgence in 1968. Four decades later, France was again paralyzed by huge student demonstrations and solidarity strikes called by the French major unions, as well as the more militant unions and organizations. With the vast majority of French universities occupied for more than a month, and the whole nation on strike, the Villepin government was forced to withdraw the provision, in a test of force with democracy in the streets that weakened the presidency itself. Le Monde commented that "précarité" was going to be a central issue in the upcoming 2007 presidential elections.

Few months before, France had been rocked by generalized rioting of the French youth of Arab and African descent in its suburban ghettos (banlieues) to express angst at racial and economic discrimination from the rest of French society. Although expressions of the same national malaise and social anguish, banlieue rioters and student protesters did not really share tacticts and demands. The French explosion of 2006 against precarity was followed a few months later by a lengthy general strike in Denmark to protest against welfare cuts especially discriminatory with respect to young people. All universities were occupied, and the right-wing government was forced to withdraw the provisions that had to do with student subsidies and other welfare benefits for young people, although it retained pension cuts for older employees.

In a different context, May Day 2006 was also a historic day of protest for U.S. immigrants, mostly of Latin-American origin, who mobilized in all American big cities to protest against a punitive anti-immigration bill being discussed in Congress. Hundreds of thousands of people from San Francisco to Chicago celebrated the first of may by taking the streets against increased repression of undocumented immigration by the Bush administration. Grassroots and community organizing, helped and funded by the progressive wing of North-American unionism -- which had already been behind the successful Justice for Janitors campaign, narrated by Ken Loach in Bread and Roses, that has organized many legal and illegal immigrants in Los Angeles -- were crucial for the media impact and social magnitude of the demonstrations.