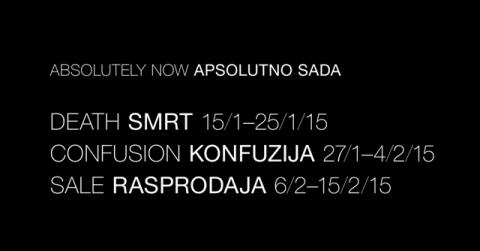 The exhibition ABSOLUTELY NOW: Death, Confusion, Sale at the Museum of Contemporary Art of Vojvodina in Novi Sad (January / February 2015), is a selection of works and documentation of the association Absolutely through three "scenographies" that change as three acts during the month of the exhibition. This exhibition re-actualizes three philosophical themes as dramatic acts around which most of the works Absolutely concentrate: death, confusion, and sale, and which can be a "trigger" for reading what is now. Three "eschatological" acts contain reinstallations of "old" works of the association in the museum space, which can be read as one possible interpretation of the recent history of the Socialist (Federal) Republic of Yugoslavia (S [F] RJ) / the Republic of Serbia. Each act of the play opens with a greeting mantra in the video work Good Evening, which, as a déjà vu, puts us in a situation of overlapping experience from two decades ago and the current moment. Only a brief review of the social and political mainstream in Serbia in the 1990s and today, in fact, indicates that the main actors of the right-wing political scene of the 1990s, today, after a break during the first decade of the new millennium, are again present in the same positions. , and the mystical eclipse seems as close as it was in 1996. However, a drama (tragedy) set in this way in three acts does not have to have a linear flow of reading, because the concepts themselves, in fact, are not diachronically fixed, but oscillate and emerge in time as non-permanent categories, so these topics in a different setting may correspond to one global eschatological composition.

The first theme of the exhibition is DEATH. In eschatology (philosophical or theological), looking to the future, death has a special status and acquires a more vibrant meaning than a simple biological end. Death becomes a condition for a series of transcendent events and processes or reincarnations by which the absolute (idealistic: god, spirit; materialistic: matter) is reached and a new ultimate order of existence. Islamic philosophy even compares death to a dream and calls it "rest between two awakenings" (Al-Ghazali). From this perspective of interpretation, the exhibition Absolutely Dead and A. Trophy marks the moment of prolonged death of socialist Yugoslavia and the utopia of workers' self-government, as well as the entire system of socialist values ​​and its transition/reincarnation into a different systemic formation of capitalism ... (G.Nikolić_ Eschatologija )

The Association ABSOLUTELY was founded in 1993 in Novi Sad. The members of the association were Zoran Pantelić, Dragan Rakić (1957-2009), Bojana Petrić, and Dragan Miletić (member from 1995 to 2001). Since 1995, the production of the association has been signed without mentioning the personal names of the members, and the collective is developing an interdisciplinary work process and media pluralism. The name of the association - absolutely - is an adverb (not a noun), and it often appears in the titles of works in a play on words with the intention of emphasizing certain meanings.

The production of the association ABSOLUTELY originated from the visual arts, in order to expand over time to interdisciplinary research of facts from the immediate environment in order to open the possibility of their new reading. This research process was of an open character and focused on various phenomena in the environment. Projects were often implemented in public places or special purpose locations (eg shipyard, bridge, cemetery, border crossings, etc.), and depending on the project idea and in different formats: video, printed materials, installations, actions, site specific projects, audio, web projects, etc.
The artistic activity of the collective ceased in 2005 when the experience was transferred and integrated into new forms for creating conditions and questioning artistic production and artistic organization (Centar_kuda.org, Novi Sad; VacuumPack, Sombor). www.apsolutno.net

After THE DUBAI IN ME, and MOCRACY- NEVERLAND IN ME, here comes IPHONECHINA, Christian von Borries's new film in collaboration with Liu Jan raises a hypothetical question:
If Apple's computer company were a state, would you, the viewers, want to live in Apple or China?

Annual program support: Ministry of Culture and Information of the Republic of Serbia