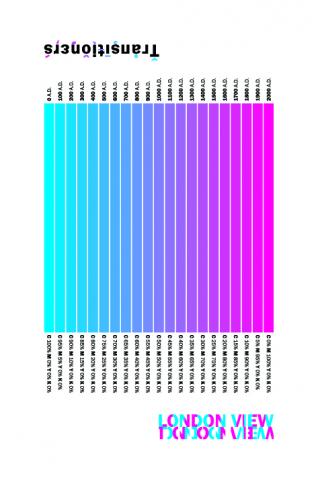 In 2006, the Paris-based cooperative Société Réaliste launched Transitioners, a “trend design agency” specialising in political transitions. Transposing the principles of trend forecasting generally used by the fashion industry to the field of politics, the project questions the revolution (transition?) as a central category for contemporary Western society. How can a "democratic transition" be produced? What is the role of design in the permanent conversion of political flux into mythology? How can the effect of an event on citizens be transformed into a controlled affect? Depending on the present political atmosphere, Transitioners define the general climate in which future social transformation movements will take place, in order to maximize their efficiency. Like any other trend design bureau, Transitioners' clients are designers, who can use the bureau's proposals to design the revolutions to come: logotypes, color charts, lexical fields, etc. For each new step in the project, Société Réaliste conceives a new trend collection, originating from a specific historical event. In 2007, the inspiration for Bastille Days was the French Revolution. The 2008 collection Le Producteur, was based on the utopias developed during the first three decades of the 19th century, by thinkers such as Fourier, Enfantin, Rodrigues, Cabet, Owen, or Saint-Simon.

In Novi Sad, Transitioners presents a preview of its 2009 collection, London View. Inspired by the 1848 European Revolution, this 2009 collection approaches the very specific context of the “Year of Revolution” and the new political paradigm experienced in those days: the scheme of a synchronous and continental revolutionary attempt. Indeed, from the first students and workers demonstrations in Paris at the beginning of February 1848 to the end of the Hungarian Civil War in December 1849, revolutions took place everywhere in Europe. Forty European cities have been the theaters of major collective events that continue to interrogate today’s political context: collective spontaneity, polycentric organization, international collaboration by means of communication and "glocal" networking.

In February 1848, Friedrich Engels and Karl Marx published for the first time the Manifest der Kommunistischen Partei (Manifesto of the Communist Party), an essay that will completely transform the history of the social movement in terms of philosophical basis, means of organization, both local and global tactics, leading to the transformation of the Communist League (mainly based on utopian socialist theoretical references, such as Babeuf or Saint-Simon) into the First International. 1848 is the beginning of the Hegelian Marxism theoretical leadership on the European revolutionary forces. The central question of Transitioners: London View concerns specific points in Marx & Engels' analyses of the political situation from which they write, in particular the inaccuracy of their "London" theoretical point of view in regard to the multiplicity and the complexity of the revolutions happening concurrently on the European continent. The collection intends to highlight similar contemporary situations of disjunction between manifold revolutionary practices and
standardized theoretical attempts.

Société Réaliste is a Paris-based cooperative created by Ferenc Gróf and Jean-Baptiste Naudy in June 2004. This cooperative manages the development of several research and economical structures in fields such as territorial ergonomy, experimental economy, political design or counter-strategy. Société Réaliste is researcher at Jan van Eyck Academie (Maastricht) and is represented by Galerie Martine Aboucaya (Paris).