Chto Delat - The Tower: A Songsiel 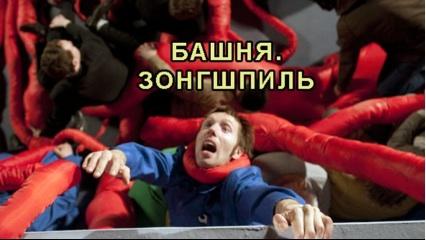 Chto Delat: New musical "The Tower: A Songspiel" is online and we are very welcome to any critique, comments, and response.

This film is the final part in a trilogy of socially engaged musicals that the Chto Delat collective began work on in 2008. This cycle includes the video films Perestroika Songspiel: Victory over the Coup (2008) and Partisan Songspiel: A Belgrade Story (2009).

here you find a video and some texts related to it:
http://chtodelat.wordpress.com/2010/05/31/the-tower-a-songspiel/

Filmed in April 2010, The Tower: A Songspiel is based on real documents of Russian social and political life and on an analysis of the conflict that has developed around the planned Okhta Center development in Petersburg, where the Gazprom corporation intends to house the headquarters of its locally-based subsidiaries in a 403-meter-high skyscraper designed by the UK-based architectural firm RMJM. The proposed skyscraper has provoked one of the fiercest confrontations between the authorities and society in recent Russian political history. Despite resistance on the part of various groups who believe that construction of the building would have a catastrophic impact on the appearance of the city, which is a UNESCO World Heritage Site, Gazprom has so far managed to secure all the necessary permissions and has practically begun the first phase of construction. (Although recent oblique signals from the Russian president may have thrown an insurmountable wrench into the works).

The film is on view right now at the exhibition project The Potosí Principle;(Museum Reina Sophia in Madrid) and will be screened soon in Zagreb in a framework of the first Chto Delat solo show "What is to be done? ... The urgent need to struggle. Part 01" at the Galerije Nova in Zagreb (opens on 8th of June) and then at the conference "The idea of Communism" at Volksbuehne, Berlin (25th of June) and then at the second solo show of Chto delat at ICA London (opening on 8th of September) and at the show Vectors of the Possible at BAK (basis voor actuele kunst), Utrecht, opening on 11th of September.