The idea of radical media: mi2 published reader of the conference held on 7-8. June 2013 in Zagreb 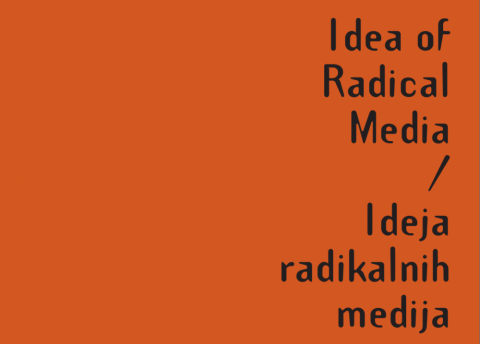 From the introduction: You have opened the proceedings of the conference Idea of ​​Radical Media, which was organized by the Multimedia Institute and held on 7-8. June 2013 in Zagreb. The conference was created in the context of the exhibition Arkzin's Outlook and the media campaign Installing the Public, with which we wanted to revalue the Arkzin phenomenon two decades later. ARKzin's publishing and activist work anticipated and reflected on tactical media practices that crystallized in the early 1990s in the face of a political moment - marked by post-socialist transition, Yugoslav wars, and alter globalism resistance - with the technological advent of the Internet. However, the goal of the conference and proceedings was set more comprehensively. On the one hand, we wanted to see how radical media practices in the field of art, public communication, and political work have been actively articulated and discursively re-articulated over the last two decades. And, on the other hand, to re-examine the very notion of radical media from a broader historical perspective as well as a critical perspective of the current social moment. By the mid-1990s, the Internet had already entered wide everyday use, opening up the prospect of radically democratized public communication. Communication innovations during the 20th century have always raised hopes that we will finally get a two-way medium in which everyone will be able to address the widest possible public. However, these hopes were usually soon betrayed by concrete implementation, which regularly resulted in greater commercial and political control over the media space. This time it should have been different. In terms of technology and distribution in the social character, the collective structure of the Internet offered reasons to believe that this will finally be the moment when we will be able to stop hating the media and accept the task of becoming media. In some respects, this has indeed happened. The Internet radically democratized the opportunity for public speaking and fostered opportunities for political organization. And while thus facilitating exchange and coordination on a global scale, at the same time it encouraged the creation of new forms of social organization and engagement on a purely local scale. Indeed, it was precisely the critical edge of Internet practices that were often more related to physical space and old media than the press than might have been assumed. However, much has changed since the 1990s. Since technological changes have shaken the social and economic assumptions of the old media, the logic by which technological development is subordinated primarily to the laws of the capitalist market and expansion has dictated that the technological development of the Internet takes a different direction. users. As Edward Snowden’s recent discoveries have confirmed, the technology of democratization has proven to be a technology of mass surveillance and concretization of our consent to mass surveillance. Nor has Internet technology proved to be a popular technique, just as technologies in the prevailing conditions cannot become so without collective practices of appropriation and socialization. This outlines the plight of our current situation: at a time when critical analysis and radical practice are just as urgently needed as they were twenty years ago, we are much more skeptical about the potential of radical media. The articles collected in this collection, backed by some of the protagonists of critical media practice and discourse over the past two decades, are an attempt to shed light on this very historical arc and reflect on the plight of the present moment. Tomislav Medak The collection was published within the project Extended Aesthetic Education.