Janos Sugar sentenced for „Wash your dirty money with my art” 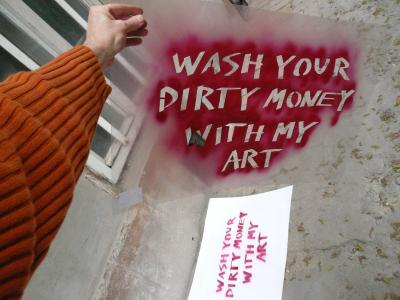 Three years ago, on June 18, 2008 Hungarian artist János Sugár sprayed the stenciled sentence „Wash your dirty money with my art” - sized 60 x 80 cm - as part of the exhibition at Kunsthalle Budapest, and at the same time illegally as a protest onto two private art institutions. One of those institutions, VAM Design Center, Budapest, filed a lawsuit against the artist, accusing him of vandalizing their building, arbitrarily estimating the damage first at 500,000 HUF (approx. 2,500 USD), then after having seen it on display at Kunsthalle Budapest, raised the value to 1,400,000 HUF (approx. 7,800 USD), then court experts revised it to 214,000 HUF (approx. 1,200 USD), and a second expert opinion eventually further reduced it to 34,000 HUF (approx. 190 USD). The lawsuit brought the attention of the public and the press to the work, and indirectly resulted in Ludwig Museum of Contemporary Art, Budapest purchasing a paper version of the stencil graffiti for their permanent collection.

The case was heard in court on April 22, 2011. During the hearing János Sugár admitted, as he had done earlier, having sprayed the sentence, but pleaded not guilty of vandalism, because he considered the act a work of public art, being socially useful, generating discussion, and ultimately stopping the controversial art management activity of VAM Design Center. The judge did not take into consideration the public art aspect of the act, but instead labeled it as graffiti vandalism. The court did not allow the appearance of two expert witnesses of the defense: Prof. László Beke, art historian, director of the Art History Research Institute of the Hungarian Academy of Sciences; and Mr. Barnabás Bencsik, art historian, director of Ludwig Museum Budapest.

The court sentenced János Sugár to 5 months in jail, with two years probation, along with a fine covering the cost of renovation, 34,000 HUF (approx. 190 USD) plus legal costs. The judge considered it an aggravating factor that the work is now on display in a museum; she blamed the artist for making money out of vandalism and also pointed out that he is an art professor who is setting a bad example to his students. Since January 1, 2011, parliament passed a new law against graffiti in Hungary: regardless of the damage caused, those who are caught doing graffiti/street art can also be sentenced to a maximum of one year in jail.

János Sugár is appealing against the sentence.