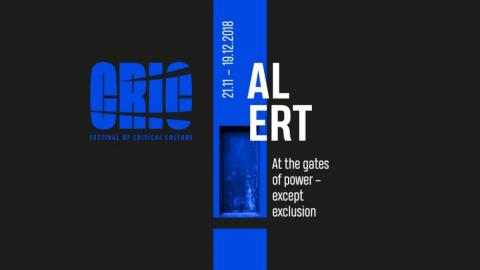 CRIC Festival for critical culture was founded in 2016 and is taking place yearly in November.
​The main goal of CRIC – festival of critical culture is the promotion of the artistic and cultural practices as societal relevant tools that will contribute to emancipation and democratization of the socio-cultural context. It aims to catalyze their affirmation, critical capacities and applicability in order to critically mobilize societal processes.

The thematic program of CRIC is created with the goal to stimulate critical debate in the public sphere, a crucial component in the promotion of the socio-cultural capital being a core deeply ingrained within the most relevant political and societal themes: human rights, the right to culture, identity issues, violence in the public sphere through the political and economical apparatus, as well as strengthening of communities through cultural and artistic practices.

The program of the festival addresses questions pertaining to the critical and developmental research of specific societal and political categories through the lens of cultural and artistic creation. It ponders upon the ways of existence of culture and of artistic production in the realm of the political, attempting to delineate the intricate network of philosophical, political and historical connections within socio-cultural practices. It delves in the common issues, influences and connections of art, politics and society. In addition, its program will explore how contemporary art and culture can (de) construct nationalistic myths, identities and frames of the otherness, dealing with traumatic points of society and immediate political themes.

CRIC - festival of critical culture is realized in collaboration with: the Multimedia Institute (MI2) from Zagreb, kuda.org from Novi Sad, Kulturtregerfrom Zagreb, Berliner Gazette from Berlin, n.b.k. Video-Forum from Berlin, Publishing House Goten from Skopje, and the platform World around us – critique in the region organized by the partner organizations kulturpunkt.hr and Kurziv (Croatia), SEECult (Serbia) and SCCA – Ljubljana (Slovenia),Press to Exit Project Space (Macedonia).