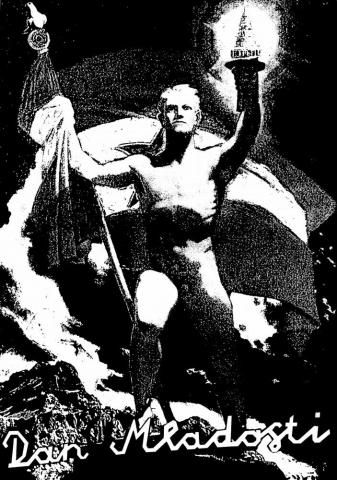 The old building of the Museum of Contemporary Art, Katarinski trg 2, Zagreb

Within the exhibition "Art always has consequences", a lecture by Slovenian artist Miran Mohar will be held on Wednesday, May 26th. at 7 pm in the old building of the Museum of Contemporary Art, Katarinski trg 2 in Zagreb. Graphic studio New Collectivism from Ljubljana, of which Miran Mohar is a member and founder, was presented at the exhibition "Art always has consequences" with the project "Posters for Youth Day" from 1987. Miran Mohar's lecture will look back from a personal perspective on the project's numerous controversial reactions. After the death of President Josip Broz Tito in 1980, the ritual of Tito's baton was still held in Yugoslavia in 1987. The political organization of the youth, the Alliance of Socialist Youth of Yugoslavia, organized the annual relay race, which was solemnly handed over to Josip Broz Tito on May 25, his birthday, at a mass celebration.

In 1987, it was Slovenia's turn. The committee for the preparation of the celebration announced a public tender for the design of posters and relays, to which the Slovenian group New Collectivism also applied. Their work was based on a painting by a German artist from the Third Reich era, Richard Klein. In their design, the Nazi flag from Klein's painting was replaced by a Yugoslav one and the German eagle by a white dove of peace. Out of several proposed works, a commission composed of art experts and politicians chose just that proposal. However, problems arose when Nikola Grujić, a mechanical engineer, noticed that the proposed poster, which was presented in the Belgrade daily Politika, reminded him of a work of Nazi propaganda. He warned some Yugoslav media about this and the so-called "poster affair" broke out overnight. The police initiated a procedure in the public prosecutor's office against the study of New Collectivism. The members of the commission who selected the proposal were examined. Due to the lack of evidence that would confirm the suspicion that the poster was a product of anti-state propaganda, no trial took place. A year later, the Slovenian Public Prosecutor's Office issued a public statement stating that the New Collectivism studio "applied a legitimate retrograde artistic method that is subject to different interpretations."

*** The "Art Always Has Consequences" exhibition includes historical works and new productions, archival material and research documentation, reinterpreting paradigmatic artistic and exhibition positions from the 1950s to the present that question the social role of art. The organizers of the project Art always have consequences are the New Media Center_kuda.org, Novi Sad: Muzeum Sztuki, Lodj; transit.hu, Budapest; WHW, Zagreb.

The exhibition "Art always has consequences" is open until 2.6. In 2010, the lecture was realized with the support of: City Office for Culture, Education and Sports of the City of Zagreb Ministry of Culture of the Republic of Croatia National Foundation for Civil Society Development