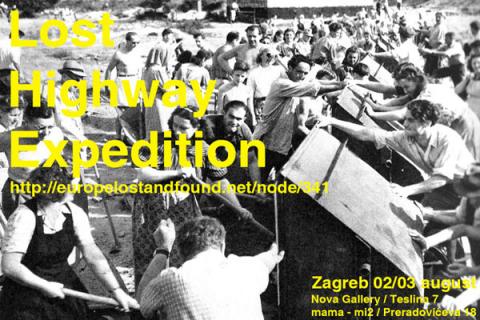 A massive movement of individuals will pass through Ljubljana, Zagreb, Novi Sad, Belgrade, Skopje, Priština, Tirana, Podgorica and Sarajevo. The expedition will generate projects, art works, networks, architecture and politics based on the found knowledge. Projects developed from the expedition will lead to events in Europe and the US. LHE is a project by the School of Missing Studies and Centrala Foundation including: Azra Akšamija, Katherine Carl, Ana Dzokic, Ivan Kucina, Marc Neelen, Kyong Park, Marjetica Potrc and Srdjan Jovanovic Weiss, together with partners in the cities of the Lost Highway Expedition. http://www.europelostandfound.net

The "Lost Highway Expedition" was initiated by the School of Missing Studies . LHE is the first event of Europe Lost and Found (ELF), a multi annual and three-phased project, involving following major themes: "Balkanization" (2006-2007), "Europeanization" (2007-2008) and "Map the Future" (2008-2009). Each project phase will build the base for the next one, thus posing new set of questions and determining new research directions. In this way, it will reflect on contemporary Europe, which it understands as a cycle of continuously reshaping social, political, economic and urban conditions and communication processes. However, each phase is planned to realize an expedition, an exhibition and a publication.

The Lost Highway Expedition is a tour to explore the unknown future of Europe. It was initiated by the School of Missing Studies as the first event of Europe Lost and Found (ELF), a multi annual and three-phased project. "Europe: Lost and Found" is an interdisciplinary and multi-nationally based research project to articulate and imagine the current evolution of new and transforming borders and territories of Europe. The subject is the continent of immigration, and its depopulation and aging, and the need for redefinition of states, sovereignties and citizenships. Challenged is the established belief and practice of nation-state, including non-representative and technocratic construction of European Union yet to vision more open and alternative definitions for populous in movements. The rejection of constitutional referendum and the riots in France signal the contradiction between homogeneous and multiple identities, the fluidity of capital and containment of labor, the liberation of individuals and their restrictions under sovereignity. Clearly, Europe cannot subsist by itself, and is already being redefined by "the others" in its quest for a self-identity. In such contexts, ELF suggests the future of Europe is best seen in the Western Balkan.