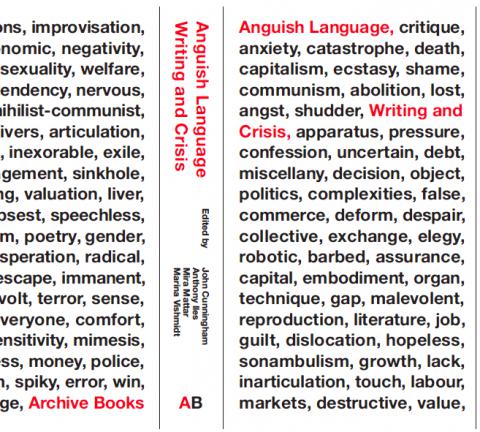 As part of the "Aesthetic Education Extended" project, art theorist Anthony Iles from London will be staying at kuda.org in Novi Sad, on several occasions and through a series of residencies during 2015 and 2016.

In the period from September 25 to October 2, we will continue talks with Anthony related to the problematization of the thesis on aesthetic production relations, the relationship of art and politics as well as their autonomy, and the problematization of mutual determinations of artistic and non-artistic social processes. The joint work concerning the art-theory-politics relationship will result in the publication of a bilingual book of essays in 2016, while during the next stay we will host Anthony and his collaborator Marina Vishmidt.

Anthony Iles writes about critics, fiction, and theory. He is one of the editors of Mute magazine in London (metamute.org), and co-editor of several books: with Mattina Noise & Capitalism (2009), with Stefan Szczelkunpm, Agit Disco (2011), co-author of No Room to Move: Radical Art and the Regenerate City (2010), as well as in the book Communization and its Discontents (2011) with Marina Vishmidt. He is currently finalizing the book Anguish Language - Writing and Crisis, which deals with language as a key aspect of the current social crisis. This research is dedicated to solidarity with the forms of alternative publishing, poetry, criticism, experimental writing, and forms of expression that emerged with the 2007/8 financial crisis. years, taking into account the language that reacts between and through current social struggles.

So far, we have realized several lectures and interventions with Anthony Iles:
Texts in rab-rab journal for political and formal research in art # 2, 2015:
Anthony Iles, Mattin and the Conceptual Policy Group - http://rabrab.fi/RABRAB-JOURNAL-ISSUE-02-VOLUME-B

Lecture Critique of the Political Economy of Art by Viktor Šklovski, Anthony Iles, at MSUV, 2014 –https: //www.youtube.com/watch? V = 79bxH_Ys5iY; lecture Media, Art Nouveau, Recession in CK13 –-https: //www.youtube.com/watch? v = vHEAulZouwE on the history of the London rave scene and culture from a critical perspective based on primary activist experience, as well as participation in a collection of texts and discussions ruins of the creative city, editors: kuda.org and Ana Vilenica, 2012 - http://kuda.org/na-ru-evinama-kreativnog-grada-zbornik-0

Within the project "Aesthetic Education Extended" during 2015 & 16. In addition to Anthony Iles, in re-examining the framework of joint production and joint artistic and theoretical production, through residency formats we also host the writer and theorist Howard Slater on the poetic translation of the surrealist Anti-Wall, and musician Chris Cutler on the subject of art and improvisation.

"Aesthetic Education Extended " is an international collaborative project of five organizations: Multimedia Institute, Kulturtreger / Books (Zagreb), kuda.org (Novi Sad), Berliner Gazette, and Kontrapunkt (Skopje). The project is implemented with the support of the Creative Europe Program of the European Union, Ministry Culture and Information of the RS, the Provincial Secretariat for Culture and Public Information, and the City Administration for Culture of Novi Sad.