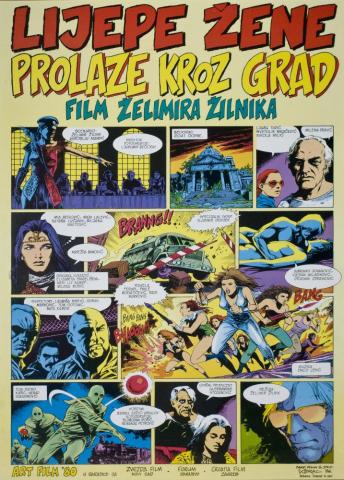 You can watch the online movie program HERE

The fourth online program includes the famous Black Film, in which Želimir Žilnik brings homeless people to his apartment and tries unsuccessfully to help them through the system of institutions. Along with him, Žilnik published a manifesto asking, among other things, "Film - weapons or shit?". The continuity of this interrogation is also visible in the three television films in this program, created as part of Žilnik's cooperation with the drama editorial office of the television, which broadcast newly commissioned programs on Monday after Dnevnik and were watched by millions of people. The dystopian story Pretty Women Walking Through the City shows abandoned Belgrade in 2041 as gangs roam the country banning the memory of the past. Good Morning Belgrade is a "film about film" made on the basis of material shot for Pretty Women Walking Through the City and continues to question the task and responsibilities of film production. The documentary drama Vera and Eržika follow the struggle of two workers to be recognized in the calculation of their pension for the years when they worked as children.

The online screening program available at www.zilnikzelimir.net takes place with the exhibition Shadow Citizens at the Edith-Russ-Haus for Media Art in Oldenburg (19/04 –17/06/2018), which includes films from all phases of Žilnik's work. On the occasion of the exhibition, WHW prepared new descriptions of films that emerged from long-term conversations with Želimir Žilnik and include his memories of the process of making films and their reception. You can read a part of WHW's conversation with Želimir Žilnik here.

The program is available until June 17, 2018, when the fifth and final program begins, which will also be available for two weeks.

Shadow Citizens will be presented at the Nova Gallery in Zagreb in November 2018. A publication with newly commissioned essays on the work of Želimir Žilnik will be published in early 2019.

The project is funded by the Federal German Cultural Foundation.