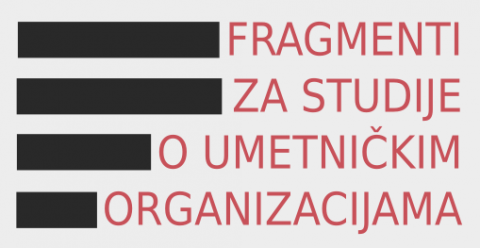 Fragments for studies on art organisations is a collaborative research working group which will bring together experts on the emergence of self-organised art groups/collectives in Yugoslavia in July 2020. Through shared reading and writing, group online sessions and public discussions, the group will provide additional reading of the material generated during the two-year research project Art Organisation, including series of interviews with actors from the Yugoslav self-organised art scene as well as analytical texts produced during the project. They will be mapped in their internal (in terms of group dynamics of work in these communities) and external dynamics (in relation to the impacts of such processes in public and institutionalised spaces). By comparing different readings and presentations of the collectives, the group will synthesise what can be seen as an all-encompassing motif, as well as where the concepts proposed through analytical texts can be further developed. What criteria will the collective process valorised by? What motivates people to work in a collective? What are the models of representation and theoretical frameworks?

In this sense, this research examines the ways in which practices have developed in the past in order to build on them, to integrate them into the framework of knowledge and skills with which artists today embark on self-organised projects, and to declare them a practical legacy that could be of great importance for the education of today's actors in the process of self-organisation in art.

Using modern tools for shared reading, conversation and analysis, Fragments for Studies on Art Organisations are conceived as a process of opening the space of writing as a space of upgrade and hypertext - a space of networking of collective comments into a format opposite to the authoritative linear model of theoretical analysis. Finally, through an expert debate on forms of self-organisation in the field of culture, theory and art, this process itself develops collaborative models for contribution to the field of theoretical analysis of artistic practices, and through the implementation of common interpretations as offers for possible contextualisation and reading of archives.

This research is a subject for discussion and dialogue on the modalities of the relationship between art and politics in the former Yugoslavia, as well as the ways in which they have been developing within self-organised groups of artists. Instead of fetishizing past initiatives which have led to works and exhibitions positively evaluated by critics that have secured them a place in art history, this research analyses specific models of collaboration that have emerged from a critical contemplation of once-existing paradigms of art production. In that sense, the focus of this project is not on the formal qualities of artistic production when compared to the results of individual and collective work, but on the mechanisms of cooperation that led to practices that changed the rules of the game and potentially had a social contribution.

Fragments for Studies on Art Organisations is a programme that is being developed as part of the kuda.org research project Art Organisation (review of historical practices through the 20th century up until now)

Art Organisation is a long-term international research project that analyses the phenomenon of artistic (self)organisation and relations within artistic groups and collectives in the post-Yugoslav region during the last fifty years, and the ways it influenced the profile and quality of their artistic production. Research within the project Art Organisation is aimed at group and collective processes of creation and internal dynamics between artists and other participants in them. The focus is on self-organised initiatives outside the framework of official institutions. Through the phenomena of self-organisation, the project questions the role of civil society organisations as potential progressive places in society through dealing with art. The project covers a wide historical field through discussions with the protagonists of these practices from the 1990s until today, with a review of the experiences and heritage of organising and collective creation in the recent past of local and national culture, through the neo-avant-garde of the 1960s and 1970s and the Belgrade Surrealism of the 1930s.

Introduction to group work research, co-authored work and working conditions was conducted during 2017 while interviewing participants and protagonists of the contemporary art scene from Yugoslavia, and it continued during 2018/2019. years. The research team is comprised of members of kuda.org with associates from Belgrade, theoreticians and art historians Milica Pekić, Stevan Vuković, Ana Vilenica, Darija Medić and Ana Peraica from Split. During 2019, the interlocutors in these recorded interviews were people from collectives and groups who have worked in the field of contemporary art, also theoreticians and art historians and artists-protagonists who realised their practice through group artwork.

You can watch these talks/interviews on the following links:

Interview with members of the curatorial collective What, How & for Whom / WHW, Zagreb, Ivet Ćurlin and Ana Dević

Interview with members of the MAGNET group, Novi Sad

Interview with Božidar Mandić, founder of the Family of Clear Streams, Rudnik Mountain

Interview with members of the ŠKART group, Belgrade / Đorđe Balmazović and Dragan Protić