PUBLIC CONVERSATION: COLLECTIVITY BEYOND ART COLLECTIVES within the programe VECTORS OF COLLECTIVE IMAGINATION IN ART, Wednesday 08.07.2020. at 7PM CET 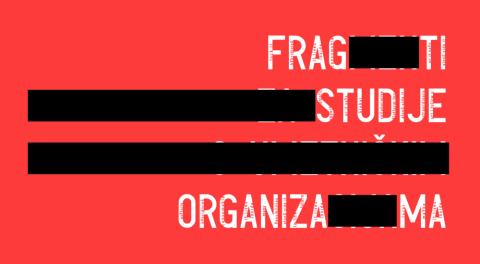 PUBLIC CONVERSATION: COLLECTIVITY BEYOND ART COLLECTIVES within the programe VECTORS OF COLLECTIVE IMAGINATION IN ART, Wednesday 08.07.2020. at 7PM CET

In the first discussion, Collectivity outside Art Collectives, we will discuss the (newly) established links between social movements and the arts, which are being articulated in the struggle against the financialisaton and privatisation of everyday life. Cassie Thornton, an activist and artist based in Canada, will talk about her artistic practice derived from experience with the Strike Debt (USA) and from Wiindo Debwe Mosewin - a feminist indigenous patrol in Thunder Bay, as well as about her new project Hologram which tries to organise sick (artists) into a healthcare support network. Tomislav Medak, a researcher and artist from Zagreb, will propose a different genealogy of the free culture movement, with references to the Pirate Care Syllabus project - a space for collective production, exchange and distribution of knowledge about (re)organising social reproduction.

Cassie Thornton is an artist and activist from the US, currently living in Canada. She refers to herself as a feminist economist, a title that frames her work as that of a social scientist actively preparing for the economics of a future society that produces health and life without the tools that reproduce oppression— like money, police or prisons. She is currently the co-director of the Re-Imagining Value Action Lab in Thunder Bay, an art and social centre at Lakehead University in Ontario, Canada. Her forthcoming book, The Hologram: Feminist, Peer-to-Peer Health for a Post-Pandemic Future, will be available this summer from Pluto Press.

Tomislav Medak is a doctoral student at the Coventry University’s Centre for Postdigital Cultures. His PhD is on political economy of technology and the planetary ecological crisis. He is also a member of the theory and publishing team of the Multimedia Institute/MAMA in Zagreb, a co-initiator of the Pirate Care project, and an artist in the performing arts collective BADco. With his colleagues at the Multimedia Institute/MAMA, since 2000 he has organised talks, conferences and exhibitions, and edited publications in the fields of political economy, tactical media and the commons. His own research interests are in technology, capitalist development and post-capitalist transition, with a particular focus on environmental crisis, political economy of intellectual property and unevenness of techno-science. At times, he also writes on theatre, dance and politics. You can find more about his writing and work at: https://tomislav.medak.click.